I remember the panic that set in the very first time my child lost her tooth because it happened so quickly and I wasn’t the least bit prepared.

My husband and I hadn’t discussed what Tooth Fairy tradition we wanted to incorporate and I couldn’t find any change for the life of me.

It all worked out in the end, but I obviously never forgot the “trauma” of being caught completely off-guard. And, to be honest, no one really prepares you for that first lost tooth. It’s not in any parenting guides that I read and moms don’t really sit around sipping coffee and discussing all the neat things they do for these special occasions.

So when my youngest left the Tooth Fairy a letter explaining how she was going to sleep in her big sister’s bed, it sparked an idea and I went to work creating a tiny Tooth Fairy letter with a mini envelope for parents to print out and leave under their kid’s pillows.

So first, let’s talk about the free printable I promised, then we’ll get on to all the other fun stuff associated with the Tooth Fairy!

Tiny Tooth Fairy letters are not a new concept, even though they were pretty new to me. There are tons of options available online, including a Tooth Fairy Certificate and even apology letters (brilliant!).

I am a sucker for all things tiny so this was right up my alley. This personalized Tooth Fairy letter with a miniature envelope is a free printable, so just click the image above to download the pdf.

Once you cut it out with scissors, slip the folded letter inside along with some money, maybe some glitter for some fairy dust, seal with glue, and slide it under your child’s pillow.

And you can reuse this mini letter every time your child loses a tooth!

They’re going to love it! Even my teenage daughters said they wish I had made a tiny letter for them when they were young. (Sorry, kids, Mommy wasn’t that creative back then.)

If you are a parent facing the T. F. questions for the first time, let me help you out with some useful answers I’ve collected for you.

What is the going rate for the Tooth Fairy?

Delta Dental does an annual poll of the average amount parents the Tooth Fairy doles out for each baby tooth. Turns out, my kids have been short-changed. (Don’t tell them!)

You are free to go off this graph or you can use your best judgment. We always told our kids that they never knew how much the Tooth Fairy was going to leave. It could be a quarter or a couple of dollars.

Although, we always told them the T. F. likes to leave an extra-large gift for one special tooth. The girls always got excited when they lost a tooth, wondering if that baby tooth was the special one. (It was usually $5 and often left on nights when the tooth-pulling was harder than usual.)

Some parents choose not to leave money as a tooth tradition but candy or small gifts like these really cool commemorative coins. We never seemed to have either lying around and money seemed easier to get our hands on, so we stuck with money. But you do you.

Does the Tooth Fairy leave a note?

As I mentioned earlier, my daughter left a note one night and of course, the Tooth Fairy isn’t rude, so she left a note in return. But that was the only time it happened. Only because said child learned the T.F’s identity later that year and before that, well, the T. F. just wasn’t creative any other time.

Had she been more creative, or just thoughtful, she probably would have. Because Santa always left a note. Not sure why the Tooth Fairy never caught on. It’s a complete mystery.

But if your kids would love to receive a tiny note like my kids would have, then the Tooth Fairy printable above is perfect!

What do you write in a Tooth Fairy note?

The letter I created is pretty short, sweet, and to the point. But if you want to get creative, you can make it very personal and add all sorts of fun tidbits.

Or, if your child would like to get the ball rolling, why not have them write a note first, then you can have the above letter all ready to go after they fall asleep.

Some of the links in this post may be affiliate links, you can read my full disclosure here or more information at the bottom of this post.

Is the Tooth Fairy a girl?

Well, in our family, we have all girls so, of course, the Tooth Fairy is a girl. But a house full of boys might not be fond of the idea of a tutu-wearing fairy flying around in their room.

The sky’s the limit here, be creative, and come up with something fun. If you need some inspiration, watch Rise Of the Guardians

, I love their spin on holiday characters. (Santa with tattoos…love it!)

Why did the Tooth Fairy not come?

Oh goodness, nothing rips out a parent’s heart quite like seeing the disappointment on their child’s face when they come to the breakfast table still holding their uncollected tooth.

Talk about needing to be creative on the spot! I’m ashamed to say this has happened more than once in our home. *hanging head in shame*

When it happened the first time, I have to admit that I got defensive and thought of saying something about the T. F. not wanting to work in messy conditions or the fact that the Tooth Fairy is busy and couldn’t wait around all night for the chatty child to fall asleep.

But her disappointment stayed my irritation (at myself) and instead of making the child feel like it was their fault the Tooth Fairy was a no-show, I blamed the magical being instead.

I don’t remember exactly the lie excuse I gave, something about addresses getting mixed up, it was storming too hard outside or maybe I just said the Tooth Fairy was swamped.

But then I worked in some extra excitement and told her I had heard about a Fairy Code that says if the T.F. doesn’t make it the first night, she really makes up for it on the second. That did the trick!

Then I set an alarm, called my husband to bring home extra cash, and prayed that I wouldn’t fall asleep before my kiddo.

Does the Tooth Fairy Leave or Take the tooth?

I personally liked the flexibility of saying it’s up to the Tooth Fairy. And of course, if my child was extra partial to that tooth, the Tooth Fairy always left it.

But if you are using the printable template above, it does mention taking the child’s tooth, so be careful not to send a mixed message you’ll have to explain away later.

Tips for Being the Tooth Fairy

Being the Tooth Fairy is not for the faint of heart, let me tell you. Sneaking into a child’s room whose radar is on high alert for the sound of beating wings makes stepping on a toy more dangerous than ever before.

And once you go in for the switch under the pillow, it feels a lot like diffusing a bomb. At least that’s how I think it would feel if I were faced with the choice of blue wire or red wire.

I have learned a few things that have helped me get out of some pretty tough situations, though. I pass them off to you now, use them well…

Whatever tradition you decide to do for your family, remember, this is all meant to be a fun, magical time for your kids, not a stressful, tear-filled experience for mom or dad.

A little preparation (and creativity) can go a long way to making this memorable for everyone.

And remember, you don’t have to be the best Tooth Fairy that ever lived. Trust me, your kids will love you the Tooth Fairy just the way she is.

*As an Amazon Associate, I earn from qualifying purchases, but if I am recommending an item in my post, it is only because I have used it myself or have done enough research on the product to feel it is a good fit for my readers.

Hi, my name is Kimberly McGraw...

I created Life Worth the Living to help moms navigate their child-rearing days with purpose, sanity, and joy by offering encouragement, practical advice, and a gentle nudge towards the things that make them light up.

Whether you are here for some tips, light reading, or want to learn something new, I'm glad you're here! 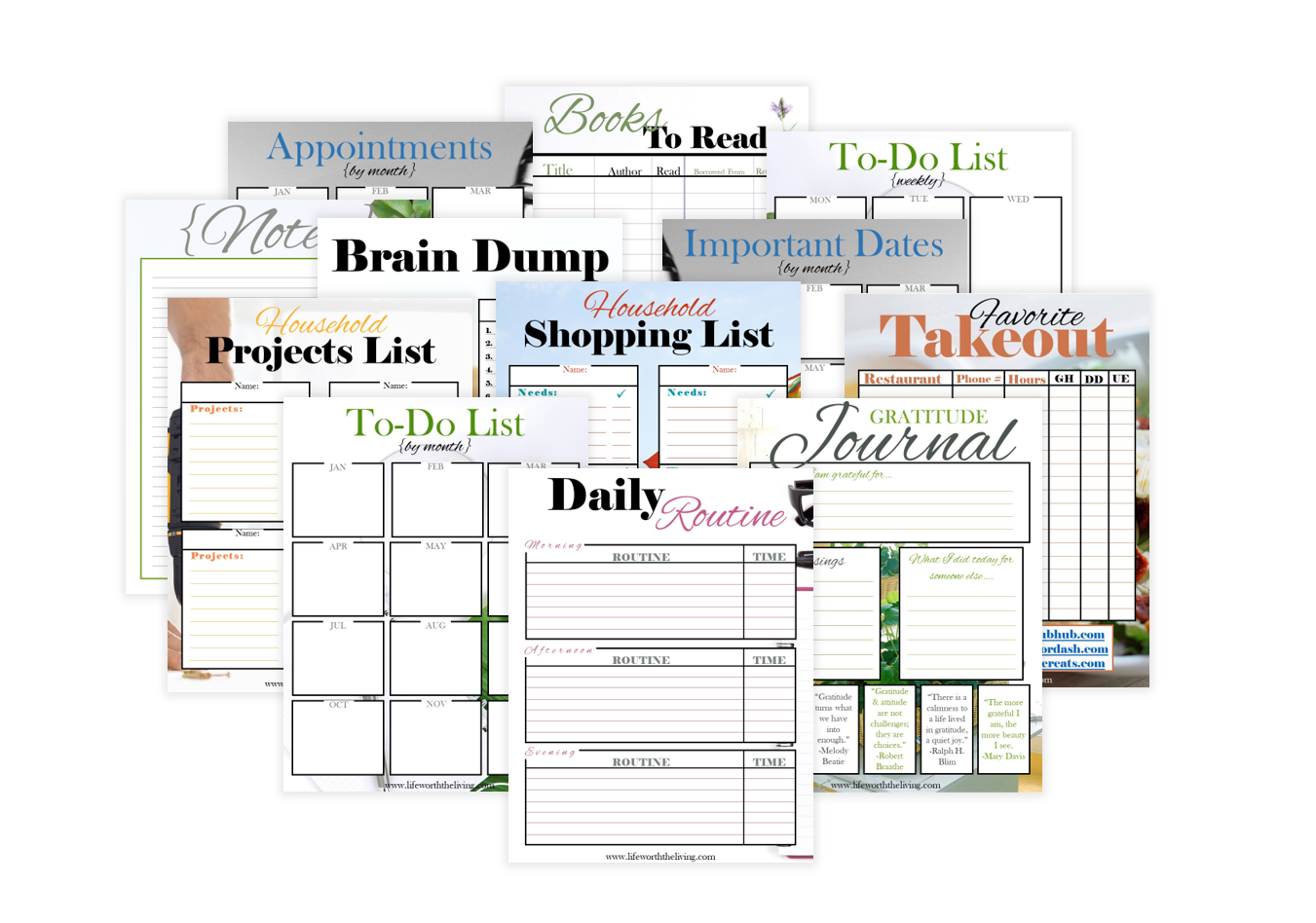 Sign up for my weekly newsletter and receive these beautifully designed printables to help you structure your day, organize your lists, and prioritize what matters.

Your downloads are on their way to your inbox!